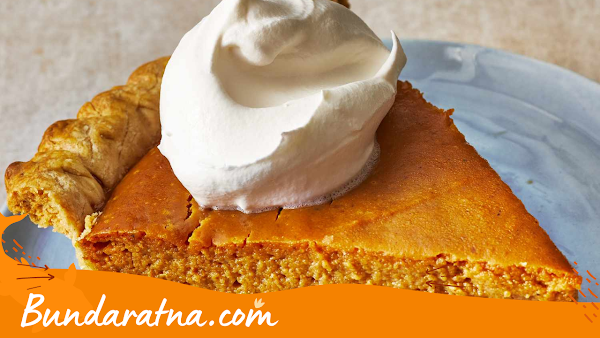 Admin
December 13, 2022
Bundaratna.com - Pumpkin pie is a dessert made with pumpkin puree, spices, and sweetened condensed milk, baked in a pie crust. It is typically served during the fall and winter holiday seasons, such as Thanksgiving and Christmas. The pie filling is made with pumpkin puree, which is mashed cooked pumpkin mixed with spices like cinnamon, nutmeg, and ginger, and sweetened with sugar or sweetened condensed milk. The filling is poured into a pie crust and baked until the filling is set and the crust is golden brown. Pumpkin pie is often served with whipped cream on top.

Here is a simple recipe for pumpkin pie:
Ingredients:
Instructions:
Note: You can also make the pie filling using 1 3/4 cups of homemade pumpkin puree and 3/4 cup of sugar instead of sweetened condensed milk. Simply mix the pumpkin puree and sugar together with the eggs and spices until well combined, and proceed with the recipe as directed.
Admin December 13, 2022
Related Posts
Recipes
Admin On. December 13, 2022
Newer Post Older Post

Get notifications from this blog